Master Plan - Accessibility and the ADA at Little Fork Church 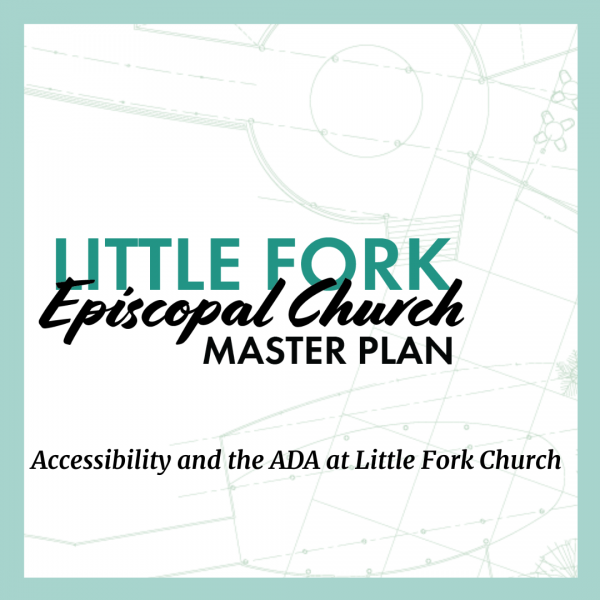 In 1990, Congress passed, and George H. W. Bush signed the Americans with Disabilities Act or ADA which was primarily anti-discrimination legislation. Under Title III of the Act:

With regard to historic properties (those properties that are listed or that are eligible for listing in the National Register of Historic Places, or properties designated as historic under state or local law), such as Little Fork Church, those facilities must still comply with the provisions of Title III of the ADA to the "maximum extent feasible" but if following the usual standards would "threaten to destroy the historic significance of a feature of the building" then alternative standards may be used.

Over the years, the Preservation Foundation and the congregation of Little Fork Church have taken steps to improve accessibility on our campus. The new Parish Hall was designed and constructed to be accessible at each of its two levels (although there is no accommodation for accessibility between the two floors).

Some years ago, one of the pew boxes was converted to allow a person using a wheelchair to enter the box, unencumbered. Previously, individuals using these aids were forced to either sit alone in the aisle of the church or be moved from their chair to the pew. This was a frequent event for my grandmother, Margaret Dyer. However, she took it in stride (pun intended) as a regular worshiper on Sundays. Finally, during an event hosted to honor a long stalwart of the church and Preservation Foundation who was relegated to sitting in the aisle, the congregation took action to modify the pew door. This modification was potentially controversial, as the structures were at that time, as close to original as possible. The work was done in keeping with the overall aesthetic design and few may even notice the modification.

Later, to improve access to the church, a portable wheelchair ramp was purchased and has been used from time to time, for those needing this accommodation. This is not a perfected solution because the ramp is heavy and its use calls attention to the disabled person.

The issue of improved accessibility has been one of the core objectives for the Master Planning Committee. The group is fully aware of the need to balance access with preserving the integrity of what has been identified as the Historic Core. Within the Historic Core, there are three areas which require improvement.

First, is accessibility to the building itself. As noted, the current temporary ramp is functional, but presents impediments that can (and should) be addressed. The Master Planning Committee has recommended that a permanent accessible route be established into the building at the rear or western entrance. This can be accomplished in a manner that is complementary to the historic structure, while providing a good experience for visitors in need of such an accommodation. We recommend that an architectural professional be consulted for this work, and that it be undertaken soon.

Second, is accessibility to the church from a vehicle. Our current Accessible parking space(s) are located near the Burying Ground, at the southeastern corner of the Historic Core. This parking area is not at all in compliance with the ADA and requires grading and surface improvements to ensure the safety of those who use it. In concert with these improvements, there is currently no accessible route from the designated parking area to the church building. The Master Plan addresses this issue with improvements to the walkway from this area, along the current driveway, and to the improved brick sidewalk. As decisions are made with respect to vehicular access within and around the Historic Core, this design objective must be considered.

Thirdly, is accessibility to the lower level of the Parish Hall. As configured, and for the foreseeable future, it will likely be very difficult for individuals using the southeastern designated spaces to access the Parish Hall lower level. As a result, it is important that designated space(s) on the north side of the Parish Hall be improved for ADA compliance. The grading in this area is not severe, and improvements here are readily achievable. ADA compliance requires that accessible spaces be paved and have slopes no greater than 2% in all directions. The Master Plan calls for paving within this area and this should also be a priority for the congregation.

Finally, outside of the Historic Core, many recreational areas are being contemplated. These recreational spaces are proposed to be a respite for regular worshipers -- and inviting to the public at large to demonstrate Little Fork as living place of worship and activity. It will likely not be feasible to create all these facilities with accessible accommodations. That said, attention should be given to “provide reasonable accommodation” as established within the ADA.As I have traveled, I have seen many public parks and exhibits that provide accessible components of the overall experience. Little Fork should include this objective as a part of the ultimate plan for all proposed recreational facilities.

As many of you know, I have been a practicing Civil Engineer for over 30 years. For most of those years, attention to the ADA was perfunctory at best, and bothersome at worst. Many times, my client’s goals may not have been coordinated with the requirements of the ADA. Three-and-a-half years ago, that all changed. My first-born granddaughter, Isabelle was born with a very rare genetic condition called Spinal Muscle Atrophy (SMA) which causes weakness in her extremities and very limited mobility, as compared to able-bodied children. We are blessed that she received a cutting-edge treatment just before her second birthday that has shown great promise in allowing her to live a nearly normal life. Thanks be to God for this treatment, and thanks to all our friends who prayed for her cure.

During the uncertain time of Isabelle’s treatment protocol, I noticed a marked change in my attention to design issues related to accessibility. I found myself looking at construction elements in the field that I knew would be difficult for my granddaughter to negotiate. I also found myself becoming an accessible design advocate during project planning sessions. I am not proud that it took a personal experience to refocus my professional philosophy. I wonder how many projects that I have designed over the years might be just a bit better for those who need this insight.

Going forward, I will never be the same. I encourage you to consider accommodating spaces when the opportunity comes your way to make the way a little better for those who need your support.