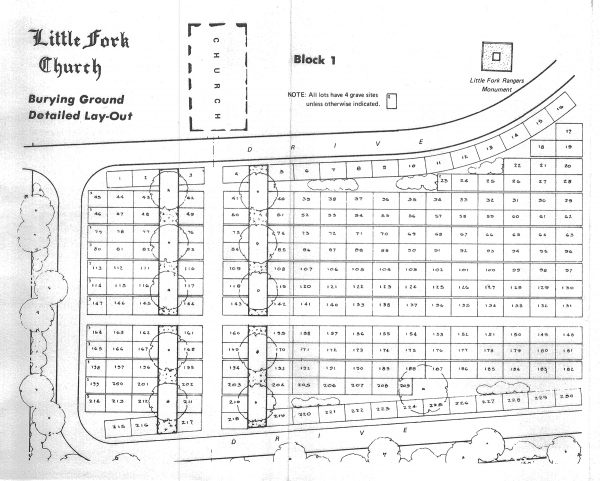 The current Burying Ground at Little Fork Church is a fairly recent addition to the landscape. Begun in 1979, the Burying Ground was designed by Carlisle Butler, a Richmond-area landscape architect who specialized in cemetery design. His plan for “Block I” created 230 lots, each containing 4 plots each, to the east of the Church as well as the Cherry Grove. In 2021, the Burying Ground hosted 918 plots, in which there were 85 burials and 43 reservations.

When the Burying Ground was organized in 1979, the vestry made a decision to use rectangular bronze markers set flush to the ground. This choice, while perhaps unintentional, preserved the pastoral setting and views across the landscape that reflected the historically rural character of the site. The model for this setting was created around 1917 when “memorial parks” came into vogue. Memorial parks prized natural scenery (albeit often manipulated to appear natural), well-placed ecumenical statuary, and a park-like setting created by prohibiting traditional rows of upright grave markers.

Prior to 1979, no known official records of burials on the property exist although some evidence suggests earlier interments. Books and records note memories of headstones that are long lost and Civil War soldiers who were buried near the Church and then exhumed for removal to Culpeper National Cemetery. A Ground Penetrating Radar (GPR) session performed in 2019 identified 3 to 4 potential grave shafts near the Church. GPR is an archaeological technique wherein a machine sends radar pulses into the ground in order to identify subsurface disturbances without excavation. The findings, although provocative, have not yet been supported by written records.

The lack of pre-20th century burials at Little Fork Church is not surprising based on historical precedent. In this rural area, many people chose to bury their dead in family plots on their own land. The Clayton, Barbour, and Cave families – original parish founders – were among those with family plots. Little Fork Church was also considered a Chapel of Ease rather than a Church, which may have factored into the decision for some families to choose the St. Stephen’s Episcopal graveyard in Culpeper. St. Stephen’s cemetery is the final resting place of the Lightfoot and Slaughter families, whose ancestors were part of the original vestry of St. Mark’s Parish. Vestry records indicate that several parish members were buried in Fairview Cemetery, established in 1855 and previously called “Citizens’ Cemetery.”

For a cultural site to be considered historically significant and potentially eligible for inclusion on the National Register of Historic Places, it must be older than 50 years from the present date. In a little over 7 years, the Burying Ground will meet this milestone. Regardless of the future historical status of the Burying Ground or the possibility of lost grave sites, the landscape today is the final resting place for many people who dedicated their lives to the prosperity of the region and Little Fork Church.

*Above Image: Carlisle Butler prepared this plan for the Burying Ground in 1979. Note the double row of trees that would become the Cherry Grove.